Ooooh it's all going on at the StM HQ!!  We have recently started working with a fantastic manager, Helen Meissner, who has been putting us forward for some fantastic gigs, which we are really excited about!!  And we decided that we're going to officially launch our EP!!  We're doing a gig at the Redbourn Folk Club on March 7th and are tying in a bit of a launch do, with press and copies of the EP to sell afterwards.  So now we're busy plugging away, getting amazing promotional material made, which we'll be handing out at the Fisherman's Friends gig next week, and setting up a mailing list.  We'll also be setting up a paypal so that people can buy our cd directly from us if not from a gig.  We're hoping to get a few newspaper interviews and radio slots to help promote it further.  Something of a launch tour.  Like real musicians! It's all taking a lot of adjusting to, but we're getting there (We think) So our next big gig is Fisherman's Friends. It's snuck on us pretty quickly....NEXT FRIDAY! We're SO excited, if not a teensy bit terrified!  They're a pretty big inspiration to us and we feel very honoured to be allowed to open for them. Let's hope we don't let them down eh!?  And it looks likely the show's going to sell out, so definitely our biggest gig to date, both in terms of profile and audience size.

Hopefully we'll be able to sneak some photos or video footage that we'll put up here next weekend.
In the meantime, check out our fancy pants postcards! :D 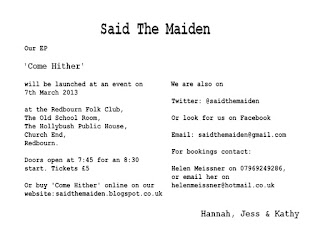 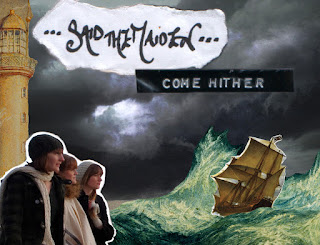